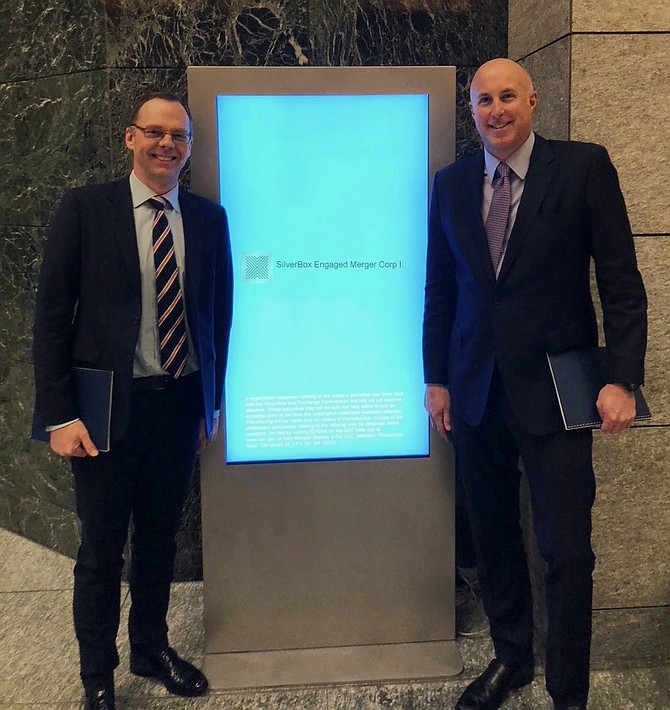 Former AECOM President Stephen Kadenacy moved to Austin, Texas, two years ago to find a better environment for his family, but the native Angeleno continues to be part of the business ecosystem in Los Angeles.

Kadenacy, who left AECOM in 2017, set up shop in the financial sector in 2018 and became an early pioneer for special purpose acquisition companies with local private equity firm Boxwood Capital.

Now, at a time when SPACs have become a go-to option for companies looking to go public, Kadenacy is helping to develop a fresh approach to these blank check offerings.

The 52-year-old Kadenacy has forged a new partnership called SilverBox Capital and has enlisted the help of a big money manager on L.A.’s Westside who managed the family wealth of Michael Milken, along with an Orange County-based money manager who is committing a total of $500 million for five SPACs over the next few years.

Boxwood Capital is still a private equity firm, but SilverBox marks a step up in its approach to SPACs.

Kadenacy and Meyer combined the first syllables of Silver Rock and Boxwood to come up with the new firm’s name.

The partnership then added Newport Beach-based money manager Engaged Capital, run by Glenn Welling, who has agreed to commit $100 million on every SPAC deal that SilverBox Capital executes.

New approach
Unlike most SPACs — where private investors are invited to participate in a private investment in public equity, or PIPE — SilverBox Capital takes a less conventional approach.

SilverBox Capital has designed SPACs using forward purchase commitments, which are essentially contractual agreements to carry out a transaction in the future.

Forward purchase agreements give the buyer leverage in negotiations to buy a private company whereas PIPE investors can back out and potentially kill a deal.

SilverBox Capital and Engaged Capital already have come together on one SPAC. In February they raised $345 million in the initial public offering for SilverBox Engaged Merger Corp. I.

Using forward purchase agreements offers a cleaner way to do an acquisition because it bypasses the strings of warrants of conventional SPACs, according to Kadenacy.

In April, the Securities and Exchange Commission issued guidance that SPACs would need to classify their warrants as liabilities instead of equity instruments.

The SEC move nearly brought the market to a halt as SPACs digested the development, and many SPACs were forced to restate their financial statements.

SilverBox has four more SPACs in the pipeline, all structured with similar forward purchase agreements with Engaged Capital. The partnership is putting final touches on a second SPAC to go public before the end of the year, Kadenacy said.

Meanwhile, SilverBox’s first SPAC is in negotiations to buy a private company and take it public in a deal valued at more than $1 billion.

It’s believed to be one of the first forward purchase agreements used by a SPAC in Southern California, according to industry experts.

Laying the foundation
Before the formation of Boxwood Capital in 2018 and his interest in SPACs, Kadenacy ran local infrastructure consulting giant AECOM, one of the largest companies in L.A. with a market capitalization of $9.3 billion.

He joined AECOM as senior vice president of finance in 2008 and became the company’s chief financial officer in 2011. In 2014 Kadenacy was promoted to president and CFO, and in 2015 he was named president and chief operating officer, positions he held until he left the company in June 2017.

Kadenacy’s departure was not related to any adverse change in the company’s business, AECOM said at the time. Kadenacy said he simply wanted a different career trajectory.

AECOM has since seen a great deal of change, including a restructuring that began last fall, the sale of its government services business and construction units and the move of its headquarters from Century City to downtown. In addition, AECOM Chief Financial Officer Troy Rudd succeeded Michael Burke as chief executive.

After leaving AECOM, Kadenacy formed Boxwood Capital and based the business in Century City. The firm’s first SPAC went public in November 2018, raising $200 million through its Boxwood Merger Corp., which was based in Santa Monica, according to SEC documents.

Kadenacy’s only work on a SPAC transaction from beginning to end — or from an initial public offering to acquisition of Atlas — was with Boxwood Merger Corp., a business combination with an enterprise value of $720 million.

A move to Austin
With the SPAC deal under his belt, Kadenacy began looking for change in his personal life.

Two years ago, he uprooted his private equity firm and his family and moved to Austin — not as part of the growing corporate flight by companies such as Green Dot Corp., the Pasadena-based fintech that announced in May it will be leaving for Texas.

Kadenacy’s reasons for the move were more personal, he said.

For one thing, he was tiring of cross-country flights to New York to meet with his firm’s significant shareholder, Macquarie Capital USA Inc.

His kids also were also getting ready to enter high school, L.A.’s freeways were a headache, and he wanted a better quality of life.

“I love L.A. I grew up there. I went to UCLA for undergrad and USC for business school,” said Kadenacy, who traded in his multimillion-dollar home in the Huntington area of Pacific Palisades for a place in Austin — a rising Silicon Valley-like region that boasts affordability and family friendliness.

Joe Reece, who is executive chairman of SilverBox Capital and still has a home in L.A., moved his merchant banking company, Helena Capital, to Ketchum, Idaho, from Brentwood.

Reece wanted a deep bench of expertise, so he enticed his friend Milken, who helped create the market for high-yield bonds in the 1980s, to invest in SilverBox Engaged Capital earlier this year.

“When we sit down with a SaaS (software-as-a-service) company or a fintech company, we’ve got people who have actually run those businesses,” Reece said of SilverBox’s five-member advisory board, which is composed of former execs and advisers with downtown-based Oaktree Capital, ConAgra Foods, Synchrony Financial, Diamond Resorts International Inc., T-Mobile USA Inc. and SunPower Corp.

While Boxwood Capital is one of the early adopters of the forward purchase agreement, it’s by no means the first to use the approach.

“We always believed that there would be a shakeout in the SPAC market, and that’s why we put SilverBox Engaged together,” said Welling, founder and chief information officer of Engaged Capital. “We believe this is a durable platform and that the SPACs that would thrive after the shakeout were going to be those that had institutional backing. For us, we think the shakeout is a good thing.”