Plot
A searing look at a day in the life of an assistant to a powerful movie executive. As Jane follows her daily routine, she grows increasingly aware of the insidious abuse that threatens every aspect of her position.

Verdict
It’s a depressing day as Jane witnesses and receives harassment in a misogynistic office where reporting it will get you fired and quitting will have people saying you’re not cut out for the job. There’s no way to win, you can only ignore the immoral culture. This also is a look at entry level work. Jane puts up with the hellish experience at the prospect of a promotion. In many other jobs there is less incentive to work for such low pay and little rewards. This movie looks at why such heinous office culture persisted.
Watch It.

Review
This features one day in the plight of a woman working on the lowest rung of the company ladder. She works at a small movie production company, and we see how this is a typical day. It seems to be a nightmare of a place to work with an overbearing boss that expects an email apology for mistakes outside of her control. Jane (Julia Garner) gets there early, works late, and you have to wonder for what. Is it the chance at the hint of an opportunity for promotion? The problem is this is how the industry works and why the culture persists.

Why is the woman in the office relegated to so many additional menial tasks like cleaning and ordering lunch? Two men that are also assistants like her don’t have to do that. While it could be she has the extra work because she’s newer, I’m not so sure.

I would guess this is a product of the #metoo movement in Hollywood and a response to Weinstein, but it’s also a look at why entry level positions can be hard to staff. You treat people poorly and they don’t want to endure the stress of the job. In this movie there is at least the potential for a promotion whereas in so many entry level positions there isn’t. That’s why so many entry level jobs are going unfilled in 2021. When you combine low pay with terrible working conditions and outright abuse, people won’t endure that.

Jane gets to see a new hire with the implication being that the new hire is there just because of her looks. The new hire is certainly getting preferential treatment. 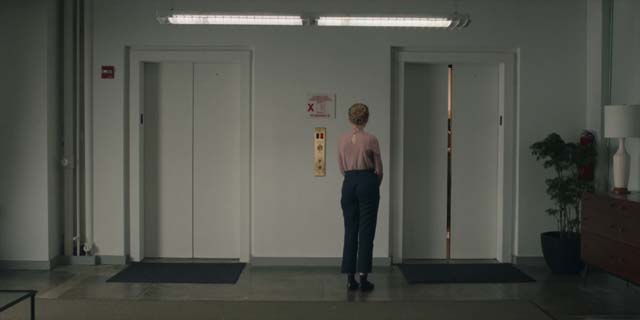 This has such a narrow focus, but the impact adds up. It’s not just one thing that makes this job difficult, but all of these misogynistic undertones in the office create a stifling atmosphere. It’s a thankless job. After a few oblique references to what this producer does with his time, Jane goes to HR. HR is unprofessional and dismissive, and that’s because HR is there for the company, not for employees. This is how you oppress employees and complaints, and all but encourage immoral behavior. The kicker to the meeting is that HR tells her she doesn’t need to worry, as she’s not the producer’s type. The elevator has to be a metaphor.

This is not a fun movie, but it makes a huge point. At the end of the day, nothing will change. She either quits due to harassment and people say women can’t cut it in the business, or Jane just ignores it because that’s the only way not to get fired. There’s no way to win. When no else seems to be attempting to stop the toxicity, it’s easy to assume they condone it or are a part of it. You can’t blame her. By the end of this you kind of think most of the people are against the culture too, realizing they can’t stop it from the bottom rung of the ladder, but from Jane’s standpoint, they’ve bought in.

For NBA Twitter’s Josiah Johnson, It’s All Jokes. Lots of Them. – The New York Times

Latest News Local Things to do